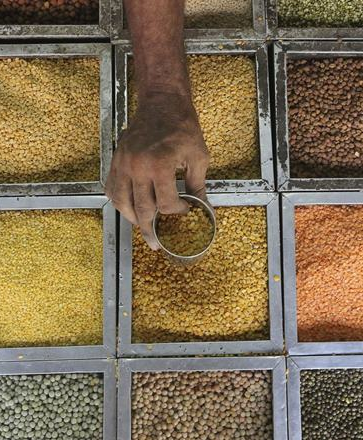 In a bid to dispose of huge stocks piled since last one year, agri-cooperative Nafed, also the nodal agency for the government’s pulses procurement drive for creation of buffer stocks, would launch an e-auction platform shortly where traders could sell and buy other agricultural commodities as well.

In a bid to dispose of huge stocks piled since last one year, agri-cooperative Nafed, also the nodal agency for the government’s pulses procurement drive for creation of buffer stocks, would launch an e-auction platform shortly where traders could sell and buy other agricultural commodities as well. The dedicated portal – www.nafed.agribazaar.com would also facilitate sale and purchase of various agricultural commodities including pulses by registered traders who would bid for the prices through an open auction system. According to Sanjeev Kumar Chadha, managing director, Nafed, the portal where more than 200 traders have already been registered, would go live by the later part of this month. “Although we have been disposing of pulses procured on behalf of the government for buffer stocks to states and paramilitary forces, we are still left with huge stocks from the last year’s Kharif procurement,” Chadha told FE. Nafed is currently preparing customised guidelines for procurement, disposal, and processing of contracts for all the agricultural commodities and food products to be sold through e-platform.

For the auction of pulses procured for buffer stocks through the portal, the base price would be fixed by the Department of Consumer Affairs. No transaction charges would be charged from the government. For the rest of the commodities, traders will participate in the open auction and transaction charges would be levied. Currently, Food Corporation of India (FCI) uses the electronic platform of m-junction for selling its surplus wheat to bulk buyers under the Open Market Sale Scheme. Although the base price for the OMSS for wheat is fixed by the corporation.

At present, Nafed, FCI and Small Farmers Agribusiness Consortium have pulses – arhar, urad, moong, masur and chana — stocks of around 1.9 million tonnes (MT) out of which 1.5 MT was purchased during 2016-17 kharif and rabi seasons. “We need to create space for kharif pulses to procured through selling out stocks through e-platform,” Chadha said. While arhar could be stored beyond one year, shelf-life of moong is around six to seven months. Nafed has urged states to distribute pulses through PDS using centre’s buffer stocks.

Meanwhile, Karnataka has agreed to purchase around one lakh tonne of pulses from the buffer stocks during next 10 months. States like Andhra Pradesh and Tamil Nadu have shown interest in pulses purchase from the Nafed. Meanwhile, Nafed has started to supply pulses to the army, paramilitary forces like BSF, ITBP from buffer stocks. Earlier Nafed had sold around 75,000 tonne of tur in the open market through commodity bourse NCDEX.

Out of the total pulses buffer stocks of around 1.9 MT created mostly through procurement and imports by agencies such as Nafed, SFAC and FCI, Nafed has purchased 1.3 MT of pulses likes tur or arhar, urad and moong from farmers. According to third advance estimate, the pulse production during 2016-17 crop year (July-June) rose by more than 37% to 22.4 MT compared to previous year’s output of 16.35 MT.