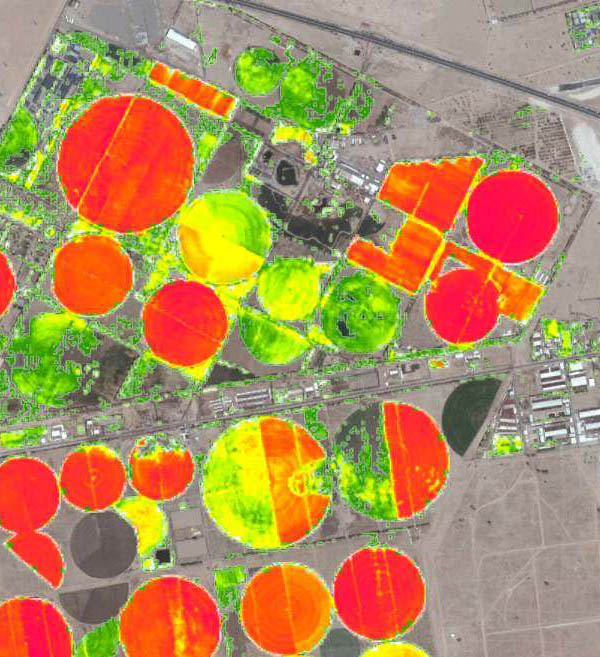 This is the final compiled report for Kharif 2019, covers European Space Agency images analysis based results of acreage estimation of guwar, paddy, cotton, crop health monitoring and NDVI based yield.

Conventionally, Crops area estimation with satellite-based crop assessment has been developed to forecast and estimate crops statistics of major crops which includes Guwar, Paddy and Cotton.

In comparison to last year’s (2018) total productivity, the total crop production and area sown this year have experienced a downfall.

The total area sown for poor quality in Kharif season 2019 has been indicated at 1 ha being the lowest among the other types of cotton sown. The acreage total for moderate quality cotton has been predicted at 27618 ha noticing medium acreage this season. Finally, the paddy of good quality has been evaluated with the maximum acreage at 83250 ha.

The city, Ganganagar, is widely known as “The food basket of Rajasthan” and “Green district of Rajasthan”. The district has extreme climatic conditions with the scorching summer, cold winters and mild rainy season. Dust storms during summer, frosty winter nights and ground fog are some of the typical features of weather hazards.

Similarly, total paddy production in Rajasthan is 2.047 lakh ton in India. Ganganagar solely grows 1,722 kg/ha on an average every year.

This is a study for kharif 2019 in Ganganagar district of Rajasthan, India stretched between 29° 54′ 13.8204” N latitude and 73° 52′ 37.8840” E longitude covering an area of 11,154 Km2. The total study area covers 9 talukas including Anupgarh, Ganganagar, Gharsana, Karanpur, Padampur, Raisinghnagar, Sadulshahar, Suratgarh, Vijainagar. The map below shows the talukas covered in Ganganagar.

Most of the agriculture in India is rainfall dependent. The current year has shown changes in rainfall pattern all over India. This year monsoon has arrived in the country later than expected. Hence continuous monitoring of the weather has been undertaken. The graph below depicts the precipitation estimation this Kharif season 2019 in Ganganagar district.

The graphical representation below is the temperature data of Ganganagar predicted for this Kharif season 2019. The maximum temperature in the district is higher than 40 °C is analyzed in 2019. The graph compares the temperature condition for the previous 2 years i.e. 2017 and 2018 followed by 2019.

The map below depicts an overall deficiency in the rainfall pattern of the country. India Meteorological Department has recorded deficient precipitation in the state. Rainfall being merely 18.6 cms in Rajasthan, production of cotton has been severely affected with a heavy downfall.

Conclusively, production in paddy has been increased this Kharif season as compared to the yield the previous year. But examining the entire data estimated for this season, Guwar (moderate quality) is the highest produced crop in Ganganagar.