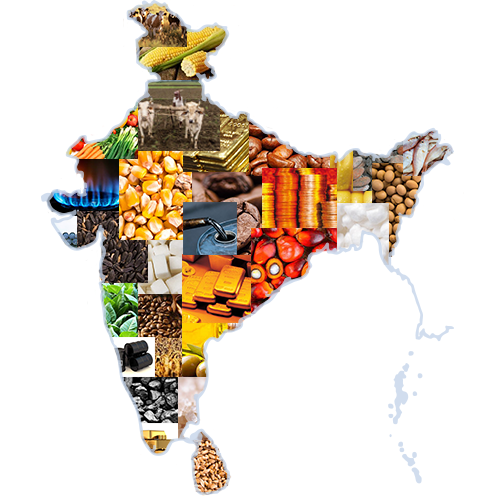 After Independence, the Parliament passed Forward Contracts (Regulation) Act, 1952 which regulated forward contracts in commodities all over India. The Act applies to goods, which are defined as any movable property other than security, currency and actionable claims.

In the early 1960s, the commodity derivative trading picked up its growth again. But in the mid-1960s, most of the commodities were banned and trading was allowed only in minor commodities like pepper and turmeric. In the 1980s, future trading for potato, castor seed and jaggery was permitted. Then in April 1999, future trading in many oilseeds was permitted and later in May 2003,  sugar was allowed to be traded as well. Since April 2003, announcing the positive role of commodity markets in India,  commodity trading was permissible in all commodities by the Government of India as National Agricultural Policy.

“After Independence, the Parliament passed Forward Contracts (Regulation) Act, 1952 which regulated forward contracts in commodities all over India…”

The Indian constitution listed Stock Exchanges and Futures Markets under the union list, resulting in the regulation and development of the commodities futures markets, solely the responsibility of the Central Government. Later, a bill on the futures contract was referred to the parliament and finally, in December 1952, the Forward Contract Regulation Act (FCRA) was enacted and Forward Markets Commission was established under the Ministry of Consumer Affairs and Public Distribution in 1953. The Forward Contract Regulation rules were notified by the Central Government in July 1954. The Act prohibited trade of goods along with cash settlement, rending a crushing blow to the Indian commodity market. A further blow came in the 1960s following several droughts in the successive years which forced so many farmers to default on the contracts (trades) and even caused some suicides. Future trading was, then, banned for primary commodities. Consequently, the Indian commodity market remained down for about four decades. In 1956, future trades commenced in castor seed at Mumbai and turmeric at Sangli.

In 1957, trading in spices was first organized by the India Pepper & Spices Trade Association (IPSTA) in Cochin. In 1958, Kanpur Commodity Exchange Ltd. was registered for the trade of rapeseed/mustard seed and its oil. Later in 1960, the Central India Commercial Exchange was established in Gwalior for the trade of jaggery and mustard seed. Surendranagar Cotton Oil & Oilseeds Association Ltd. was incorporated on 18th November 1964 for the trading of cotton, cottonseed and kapas but in 1966, as per Dantwala Committee Report, trading in cotton and many other commodities was banned. After the trade was banned, many traders resorted to unofficial and informal trade. Meanwhile, Rajdhani Oil and Oilseed Exchange Ltd. (ROOL) was established in Delhi in June 1976 to trade jaggery. In 1977, trading in castor seeds and linseed was also suspended. However, in Indian liberalization period as in June 1980, trading was reintroduced as per the Khusro Committee’s recommendations. In the latter half of 1980, the Indian government began trading potatoes in a few markets of Punjab and Uttar Pradesh. Then in 1983, Meerut Agro Commodities Exchange Company Ltd. was set up to trade jaggery.

In June 1993, the Government of India set up Kabra Committee to review the future of trading for commodities which were absolutely prohibited. Following the economic reforms in 1991, the Indian government appointed an expert committee on the commodity markets to form and submit a report on the reintroduction of trades on India which were banned in 1966. The committee included The Shroff Committee (1952); Dantwala Committee (1966); Khusro Committee (1980) and Kabra Committee (1994). The report was submitted in September 1994 proposing to expand the market coverage to agricultural commodities as well. Last but not the least, for the farmers’ commodity markets is an efficient system for price discovery as well as a price recovery mechanism. Trading in raw jute and jute goods began in Calcutta with the establishment of Calcutta Hessian Exchange  Ltd.

In the early 1990s, the Forex Crisis and liberalization led to policy changes in India. After India signed the General Agreement on Trade and Tariffs (GATT) to be a part of the World Trade Organization (WTO) in January 1995, The World Bank and United Nations Conference on Trade & Development (UNCTAD) submitted a joint report to the Indian Government recommending to revive trading in farm commodities in the world markets after removal of trade and non-trade barriers. The new committee constituted also recommended that commodity exchanges in pepper and castor seeds may be upgraded to international markets. In 1997, the Coffee Future Exchange India Ltd. was set up in Bangalore and international trade in black pepper was permitted. Later in 1998, the permission for offshore exchange for non-oil commodities was granted. As a result, future trading was revived towards the end of the 20th century, after a lapse of nearly three and a half decades.

In 1999, the National Board of Trade was set up by the Soybean Processors Association of India (SOPA) to trade soya oil to oil industry stakeholders. In the same year, approval for trading in edible oil & coffee and international contracts for castor oil was permitted. In 2000, the First Commodity Exchange of India Ltd. (FCEI) was promoted in Cochin (Kochi) for trading in coconut oil and its oil cake. The National Agricultural Policy 2000 envisaged international & domestic market reforms and demanded all controls and regulations in the agricultural commodity markets. The committee on Strengthening and Developing Agricultural Marketing (Guru Committee: 2001) emphasized on the need for trading in price risk management and in the marketing of agricultural produce.

In July 2000, the National Agriculture Policy and Finance Minister announced, in Budget Speech for 2002-2003 to resolve the gradual withdrawal of procurement and distribution channel by setting a market mechanism to perform the economic functions of price discovery and risk management.

In 2001, offshore exchanges for hedging in petro-products and trading in sugar and tea was permitted. In 2002-2003, the National Level Multi Commodity Exchanges was established and Bikaner Commodity Exchange Ltd. (BCEL) was set up in 2002 to trade mustard seed and mustard oil.

Exchanges being established in India authorized numerous warehouses with additional energy in the existing trading where warehouse receipts could be issued, which can be traded. Later, the introduction of scripless trading (in DEMAT form) in capital markets paved the way for Demat-holdings of Commodities. For traders & exporters in India, this was an important milestone in Indian Commodity Trading. As compared to 59 commodities being traded in 2005, 94 commodities were being traded the next year, in 2006. In January 2007, a temporary ban was implemented on urad and tur dal to ensure orderly market conditions.

The Indian government then allowed setting up of new modern, demutualized multi-commodity exchanges, nationwide, with investment supported by private and public institutions. The reason behind the acceptance of the government was the grudging reluctance to modernize and slow pace of fair and transparent structures by the existing exchanges. NCME was the first national-level exchange to be granted permanent recognition by the government deregulation and liberalization after the forex crisis in the 1990s. In April 1999, the govt took a decision to remove all the restrictions from every commodity including foodgrains, pulse and bullion.

Towards the end of 2006-07, trading in wheat, tur, urad and rice was banned and an expert committee was set up to examine to which trading through exchanges had contributed to price rise in agricultural commodities. But there was no relationship found between the two. The trouble arose due to a large number of variables that impact spot trices. As a result, NCDEX set up NCDEX Spot Exchange Ltd. (NSPOT) on 18th October 2006 which is an electronic spot exchange offering trade in both agricultural and non-agricultural commodities. However, the ban over the specified commodities was removed in 2009.

India is among the top producers of a large number of commodities along with a very long history of commodity trading and related derivatives. The Indian commodity derivatives market has seen a lot of ups and downs but has finally arrived and stabilized with enormous progress in technological & transparent terms and in the trading procedure.

Interestingly, this has only happened after the Government protection was removed from a number of commodities and markets were allowed to play their essential role. All the lows and necessary acts were a lesson for the policymakers in developing countries, that pricing and price risk management must be left to the market forces rather than trying to achieve the same through the administered mechanism. The management of price risk is going to assume even greater importance in the future where free trade and removal of trade barriers exists, across the world.

Developing countries like China consume commodities voraciously and that’s why global commodity market is much bigger and wider than the stock market. Development of vibrant, active and liquid commodity market would help the investors to hedge the commodity risk, take speculative positions in commodities and exploit trading opportunities in the market. To sum up, keeping in view the past baggage being carried by the existing exchanges, the objective of catching up with developed nations can be achieved by continuing with the policy liberalization, initiating new policies and coupled with regulatory pressure indirectly by the competitive market-friendly policies.